I ended 2018 with one simple goal, really. I wanted to work on consistency in my writing. Getting all kinds of words in huge bursts from time to time with weeks or even months of nothing in between wasn’t working for me any more. I also knew I had to actually track my word count to see where I was and how I could improve.

So back on December 23, 2018, I started what I figured might be a rather modest streak. I’d write 250 words a day, every day, more if I wanted or needed to. That was it. Instead of scoffing at such a low bar (because I definitely could write so much more than that, even though I didn’t do it often enough), I decided to follow that, be happy when I hit it, and see how it went. Heck, that baseline would give me 91,250 words if I didn’t write another word, so it was worth doing. 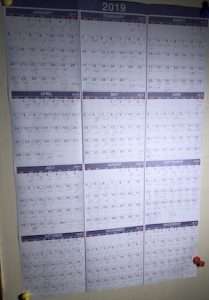 I bought myself a 34 inch by 22 inch $12.49 wall calendar that looked pretty intimidating with a vast series of empty squares, set up an Excel spreadsheet, and jumped in.

I did hit the 250 words a day goal, which added up to 373 days with my early start. Some of those days, weeks, and early months had rather low totals, but I didn’t miss a day. That made writing start to feel…routine. The usual. Not a lot different than brushing my teeth. And for me at least, that’s a good thing.

I really internalized how I didn’t need hours and hours of time, complete solitude, the perfect setting, the right caffeine volume, the correct music, whatever.

I could write because that’s what I did. Every day. In fifteen minute bursts, in hours-long pushes. At home in my favorite writing spot, on airplanes, in cars, in hotel rooms. I still don’t love writing out in the noisy world, but now I know I can do it. I wrote in an open restaurant in Las Vegas, at our table during a crowded convention, and the one I’m most proud of, on a bus full of ten-year-olds on the way to a field trip to Washington, DC with Finding Nemo blaring over the speakers.

The point is, I wrote. Consistently.

The fun thing is I don’t even notice hitting 250 words anymore, though being determined to hit that goal kept me going on a lot of slow days or late nights early on. I don’t notice 500, either, because I’m aiming for 1000 or more now. Talk about a big change from incremental improvements!

This was also a year of short fiction for me. I didn’t quite make it to 52 short stories. But I’m delighted with going from 18 in 2018 to 44 in 2019. That more than doubled my short story inventory! And short stories accounted for 221,079 words alone, more than half of my total. 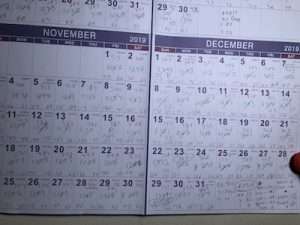 The other words were finishing up existing projects, writing three novellas and one novel, and my current project of over 60,000 words of an alternate world fantasy novel that I’m absolutely loving. That ongoing project (or else knowing what I’m excited to write next) is key for me, especially with short story deadlines popping up. I write the short stories over a day or two, then go right back to the novel because I’m having so much fun with it!

As far as other goals I can control, I also published something every month plus extra. That ended up being two novels (finishing one series and starting another), three novellas (also parts of series), a series omnibus, two short story collections, and seven short stories.

That brings me from my first three published works at the end of 2016 to ending the decade with 31 altogether, with 18 of those novellas, collections, or novels. I also got everything that was reasonable out in hardcover and Large Print formats. While those don’t count as new publications for me, they are new products and more doorways into my writing. The interesting thing about that is hardcover and especially Large Print versions outsell the regular paperback editions! 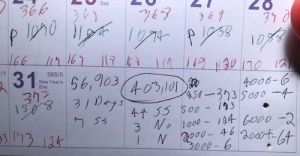 I also had my first three professional short story publications, which I’m thrilled about, but that’s one of those things I can’t control except by continuing to practice and submit stories.

I never properly tracked words before, but as close as I can figure, the best year I’ve had in the past was around 250,000 words. Most years didn’t even come close to that before now. So the two simple goals of a baseline of 250 words a day and tracking have certainly been successful and well worth continuing.

I do indeed have exciting, inspiring, not sure I can make it, pie-in-the-sky goals for 2020 to build upon the foundation of 2019, but I’ll keep those to myself for now. A whole extra Leap Year day to play with and everything!

For today, I’ve got another short story deadline to aim for, and a bunch more words to write and stories to tell.