I’m delighted to have my space opera novel Plurapod Pathogen as part of the Visions of the Future StoryBundle! For a limited time only, you can pick up ten wonderful science fiction ebooks for $15.

Just think of all the supply-chain worries you can avoid while getting your holiday shopping done early, and giving yourself the gift of reading!

But head on over to https://storybundle.com/future before time runs out! And read on for more about discovering the aliens of Plurapod Pathogen.

One of the most fun and challenging parts of writing science fiction is making your aliens…well, alien. Much as I love the original Star Trek and Lost in Space, quite a few of the critters they came across in those series didn’t stray too far from the usual homo sapiens blueprint.

Strange as it may seem, one of the best jumping off points for creatures that could easily have come from out in the distant stars is to really take a good look around Planet Earth.

Insects are an obvious choice. My goodness, the life cycle of butterflies is truly bizarre when you think about it. They go from caterpillars to pretty much goo inside a hard-shelled chrysalis, then come out as gorgeous creatures with wings.

The long-cycle Magicicadas that swarmed much of the East Coast this past summer are another, which I happen to adore. Each different brood in the US emerges within a few weeks, sing those amazing songs, get together to make new cicadas, and all die together. Then the larvae tunnel themselves underground to wait for seventeen years (or thirteen, depending on the brood) before they start the cycle over again.

For a kind of creepy example extremely close to home, we humans have aspects of colony organism going on. We have a thriving microbiome in our gut that helps us digest and gain energy from our food, and if that gets sick or wiped out, we’re in for all kinds of health problems.

But one of the most fascinating and ever-expanding sources for bizarre varieties of life is in our waterways.

Plurapod Pathogen, my novel in the fantastic Visions of the Future StoryBundle, started out with a suggestion to look to the sea. To an ocean-side aquarium, in fact, and get ideas from there. The possibilities truly are endless, and we’re still discovering more all the time.

Certain types of jellyfish are colonies of specialized critters that work together, kind of like humans. And we only have to read a tiny bit about sea anemones or corals to understand how truly strange life in our oceans can be.

The one that struck my eye and caught the attention of the toddler running the writing machine in my mind was a sort of starfish called a sunflower sea star. They don’t have the five arms of a typical starfish, or the eight limbs of an octopus. They can range from eighteen to twenty-four arms. And they’re huge, some over three feet across!

I was also fascinated by the variety of colors, from orange to brown to even purple.

So of course I started wondering what might happen if those critters—big as they are now—got much, much larger. And naturally they’d need to be smart enough for humans in our distant future to come across them somehow.

I knew I’d need a specialized setting of some kind, one that would suit both humans and these aquatic creatures. That led me to an aqua-farm, essentially a huge spaceship with many levels, each one a different type of watery habitat.

Once I had one, why not have dozens, maybe hundreds of them, all orbiting our sun in a ring between Jupiter and Saturn? And they may as well serve as a distant version of immigration and customs out there, serving arriving and departing traffic, not to mention handling construction of deep-space vessels, too.

See how fast the story grew once I started playing around with some truly alien creatures? I went from (admittedly huge) sunflower sea stars in the Pacific Northwest all the way to technology advanced enough to build and maintain a vast ring of orbital stations.

The story was off and running to say the least!

Of course I needed a name for these wonderful critters, one that reflected their structure in some way. Plurapod jumped right into my head, and I was honestly shocked to see it hadn’t much been used before.

The other great thing I gave myself with the plurapods is the gift of a massive story world to explore and play in. So many questions waiting for answers! Where did they come from? Where else are they now? What kind of power do they have? How did humans cross paths with them?

I touch on a bit of this in Plurapod Pathogen, but there’s much more to come that I can’t wait to discover and share.

One thing I did realize as I was writing was this story needed a second setting: a colony planet in a distant system. This one inhabited by humans, plurapods, and the native water-loving species, the Ajarans. I’ll leave their delightful description for the novel. All I’ll say is they were also inspired by an Earth critter I then turned up to eleven.

From there, the systems of the worlds began to fall into place. How the distant Ajaran system was related to Earth, and why that mattered so much.

And the big problem facing all these creatures came from yet another bizarre life form that I’d discovered working on a non-fiction book more than ten years ago. Again, modified, and in this case worsened, to fit my purposes. More on that in an upcoming blog.

I truly never do know where the things I’ve got tucked away in my mind will come in handy. Which is one reason I never tire of learning new things.

I took this same lesson into other stories, especially my novella Restricted Species. I have to admit one of the alien creatures in that tale kind of freaks me out.

I’ve ended up doing something similar with fantasy stories as well. Possibly the most out there one I’ve come up with (so far) is in an upcoming epic fantasy series that features flying horses and mages and a guy who brings bad luck with him everywhere he goes. I flat-out scared myself with one of the creatures in that world, to the point that I shiver just thinking about the Big Bad Thing. Keep an eye out for the novels in the Misfortune and Magic series for more about that.

And while you’re learning more about the Visions of the Future StoryBundle, be sure to check out AbleGamers and help bring much-needed connection into the world if you can.

Happy reading now and into the future! 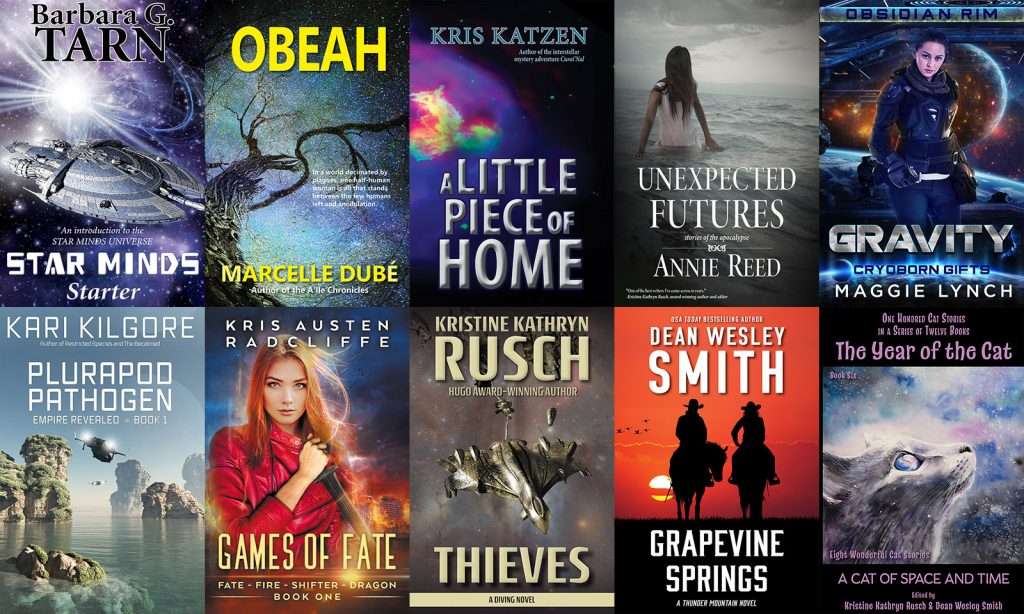