Welcome one and all to The Infinite Bard! Our mystical tavern full of storytellers, merrymakers, a roaring fire, and an unlimited supply of your favorite refreshing beverage is always open once you know the way.

I hope you’ll sit down, relax, and let the tales take you away for a much-needed break from everyday life. You might just find a new favorite bard among our number. You can sample the wares of other featured tale-spinners at my Infinite Bard page.

Read on for my fourth turn on the Infinite Bard stage, a brief journey to a distant land in the distant past, with a rather unlikely heroine. This modern fable won second place in the Virginia Writers Club Golden Nib Contest in 2019. I hope you enjoy The Spider Who Ate the Elephant!

In case you missed my first three turns on the Infinite Bard stage, be sure to check out Sensing the Storm, a prequel yarn from my Storms of Future Past Series. Real People Romance: An Adventure in Crowdfunding ties into both my Dana Sanderson Short Mysteries and my Terminalia stories. And Odds and Endings: A Lightning Gap Story, the doorway to an ever-growing collection of stories set in an enchanted bookstore in a town full of magic.

For more of my fiction, including exclusive free short stories and discounts, early pre-sales, and adorable pet photos, pay a visit to The Confidential Adventure Club.

A Modern Myth. An Eerie Natural Phenomenon.
In the distant past, in a distant land…

Grandmother Spider faces a sad problem far too big and difficult for her to solve.
The end of her family and all the creatures in her land.
Find out how her triumph echoes from then to now, and into forever.
A tale of compassion, survival, and love. 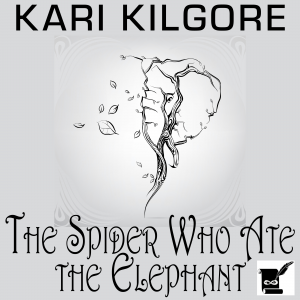 The Spider Who Ate the Elephant

You may have heard tales of spiders moving into a town and covering it with their silk. People seem to ignore spiders until this happens, at least as long as they don’t see the spiders. Then they wake up one day to go about their important human lives as they always do, but they find their town transformed.

The grass, the trees, even their big, powerful cars are draped in layers of shimmering, white silk.

“What could have done this?” they cry. “No person has done such a thing, and no other creature could possibly be so powerful as to disrupt us in our busy lives!”

One of them, often a child, finally whispers…

“Spiders?” they cry. “No creature so tiny could do such a thing to us.”

And yet it is so. One spider cannot do such a thing, it is true. But most people can not imagine that there are as many spiders as people. Hardly any people realize there are in truth many more spiders than people, and it has ever been so.

Many thousands of years ago, long before there were people and all of their lights and machines and rushing about, there were animals and insects all over the land. And as they do now, these creatures were able to work together when something threatened them all. It is a lesson they still hope the people will someday learn.

In this land, a great river brought all of the water the animals and the insects needed, and at times the river flooded. These floods made the land much richer and more fertile when the mighty waters receded. The animals and insects depended on the floods and prepared for their coming.

Many creatures had their homes near the river, but never where the floodwaters would flow. They had learned the pattern of the river over thousands of years, and they knew it very well.

On this day, she was feeling weary and tired. Her many, many years of living were coming to call all at once.

When she led her daughters to the river, she knew her days, her long and beautiful days, had come to an end at last. Her great heart, so wise and eternal to all of her daughters, slowly came to a stop.

Her daughters and eventually her sons for many generations came to mourn her, as elephants still do to this day. When the time for mourning was over, they moved along their way, with a new grandmother elephant leading the herd.

As the floodwaters began to rise, the grand old elephant’s body blocked the river, and all of the waters behind her began to rise. Many creatures were forced to leave their homes, homes that had sheltered generation upon generation of their families.

Then the animals who ate the smaller animals were hungry. The hunger spread throughout the land with no end in sight, with larger and larger animals suffering. The insects suffered too, with less animals to feed on every day.

The wisest of the animals and the insects was also one of the smallest. She was a grandmother spider. She had seen many years come and go, and she could see disaster building for all of her family and all of the other creatures.

One of her sisters had told her long ago of the desert that came when a river stopped flowing. She was terribly afraid for all of the animals and insects in her land. She heard their cries, their terrible and piteous cries.

“How will we move the grand old elephant?”

This was a spider who had countless babies, and her time for having babies was nearly through. She felt helpless, for she knew all of her babies would starve and drown too if the river continued to rise behind the grand old elephant. All of her babies beyond the grand old elephant would starve and die if the river stopped flowing and a desert took over their fair land.

The grandmother spider was terribly afraid. She cried her strange spider tears until she fell asleep.

When the grandmother spider woke, she had an idea. When her babies hatched, they were so very hungry. Maybe they could help the grand old elephant and all of the other creatures as well. Maybe if she had enough babies, they could work together to save them all.

She set to work. She made egg sack after egg sack, far more than she had ever made, putting all of them safely and carefully in the trees above the grand old elephant. Instead of hundreds of babies, she made thousands, many thousands, more than even she could count.

The waters kept rising, but instead of leaving with other animals and insects, the grandmother spider worked night and day, making babies and spinning egg sacks to keep them warm and safe.

When she was through, when she had made as many eggs as she could make, the grandmother spider curled up in a ball on the highest leaf of the tree. She waited for the eggs to hatch, to try to save them and all of the other creatures in their fair land.

She could not move or hunt for herself, not anymore. She had used up all of her energy and her silk, all she had ever had. At last, the first of her babies began to hatch.

“Mother,” they cried. “We are so hungry! What shall we eat?”

With the little voice she had left, the grandmother spider whispered to the last babies she would ever have.

“The grand old elephant has all the food you will ever need.”

“We cannot eat one so huge,” the babies cried. “We will starve!”

“Wait until your sisters and brothers have hatched,” the grandmother spider whispered, even quieter than before. “All of you can work together. All of you can save all of us.”

With that, the grandmother spider died.

The babies hatched one by one, and each told the next one to join, to work together, to save their land and all who lived there. They began to spin, to make a funeral shroud for the grand old elephant, to cover her with the respect and dignity she so richly deserved.

Once the shroud was complete, the baby spiders fed. Together they worked so quickly that the waters were able to pass through, and the flood behind them began to recede.

The land was fertile again. Instead of poisoning the water, the grandmother elephant’s body made the land more rich than before. The insects and all the animals who had left slowly began to return, and before long even the fish were swimming in the waters again. Everyone in the land was happy and healthy.

The baby spiders were so strong and healthy after their start in life that they went out and populated the land, then other lands, then the entire planet. To this day, so many thousands of years later, the spiders remember that distant grandmother spider and how she saved everyone.

They gather together and make that same shroud, for their grandmother spider and for that grand old elephant.

Maybe now that humans know this tale, they will understand what that giant mass of silk is really for. It is not to slow them down, or scare them, or to make a mess of their orderly human world.

That silk is the funeral shroud, echoing through the millennia and all of the countless insect and animal babies the great love for that grand old elephant.

That silk echoes the great love of that grandmother spider.

The spider who ate the elephant.

Thank you for reading, and I hope you enjoyed The Spider Who Ate the Elephant as much as I enjoyed writing it!

And be sure to browse through all the other wonderful tales available at my Infinite Bard page. You just might find another favorite storyteller.

The Spider Who Ate the Elephant is available from your favorite ebook retailer and in the collection Fantastic Shorts Volume 2 in ebook and print.

In case you missed my first three turns on the Infinite Bard stage, be sure to check out Sensing the Storm, a short prequel yarn from my Storms of Future Past Series. Real People Romance: An Adventure in Crowdfunding ties into both my Dana Sanderson Short Mysteries and my Terminalia stories. And Odds and Endings: A Lightning Gap Story, the doorway to an ever-growing collection of stories set in an enchanted bookstore in a town full of magic.

For more of my fiction, including exclusive free short stories and discounts, early pre-sales, and adorable pet photos, pay a visit to The Confidential Adventure Club.

The Spider Who Ate the Elephant
Copyright © 2021 by Kari A. Kilgore
All rights reserved
Published 2020 by Spiral Publishing, Ltd.
www.SpiralPublishing.net

This book is licensed for your personal enjoyment only. All rights reserved. This is a work of fiction. All characters and events portrayed in this book are fictional, and any resemblance to real people or incidents is purely coincidental. This book, or parts thereof, may not be reproduced in any form without permission.